Jason is playing video games on the couch when his sister Ashlynn & Naomi walks in loudly flapping their basic flip flops. They sit next to him on the couch and props up their bare soles to the camera.? Ashlynn tells her brother he sucks at this game and says she bet she can beat him. Jason challenges her to a game. Ashlynn says yes but the loser has to be the slave for the day. They play a quick game on the Xbox and Ashlynn wins! Ashlynn & Naomi are super happy and say your my slave now! They tell him to put down the controller and get on his knees in front of them. Jason reluctantly gets on his knees before the brats. They pick up their flip flops next to the couch and tell Jason her slave to lick the soles of their flip flops where their feet have been and drags them both down Jason’s tongue. Then she sticks her bare soles in his face and tells him to smell them. She asks them how they smell and he says stinky as she laughs. Then she makes him stick out his tongue again and lick her bare soles as she drags them down his tongue. Naomi then does the same. Jason winces as Ashlynn & Naomi laughs at his torture. Then they make him lie on the ground below them and verbally humiliate him as they then make him stick out his tongue and? drag their bare soles down her brothers tongue. She has him lick his sisters bare soles heel to toe.? She humiliates her loser brother as he licks her soles clean with the angle from a little down below and not to close so her soles and both of you are visible. She calls him a loser and laughs at him. Then she laughingly humiliates him by telling him shes gonna make lick her BOYFRIENDS FEET! She says her brother is gonna lick HIS stinky big soles! Jason moans audibly as she talks about how stinky and humiliating this will be to lick her BOYFRIENDS feet. Then she says wait a sec and leans over the couch and grabs her boyfriends? used flip flops! She tells Jason to stick out his tongue but he refuses. She says do it loser you are my slave! and says stick out your tongue! He reluctantly does and she then has him lick her boyfriends? used flip flops dragging them down his tongue. She laughs at her brothers torture. She then puts her boyfriends flip flops down and then has him lick her bare soles more.? She talks more about making him lick her boyfriends feet as punishment. She tells him they will be BIG and stinky so you need to get ready to be his slave too! She wants her brother to get ready to lick her boyfriends BIG feet so she has her brother then suck on her heels with her soles facing the camera. She tells him her boyfriends feet are bigger than hers so he needs to be ready! Then she has him suck on her other heel. After this she has him clean between her toes and lick her soles more with more forced bi foot talk about licking her boyfriends feet she laughs. She tells her brother to get ready to lick her boyfriends feet as Jason moans. She laughs and says she loves having her brother as a foot slave! as Jason licks her soles and the camera fades. 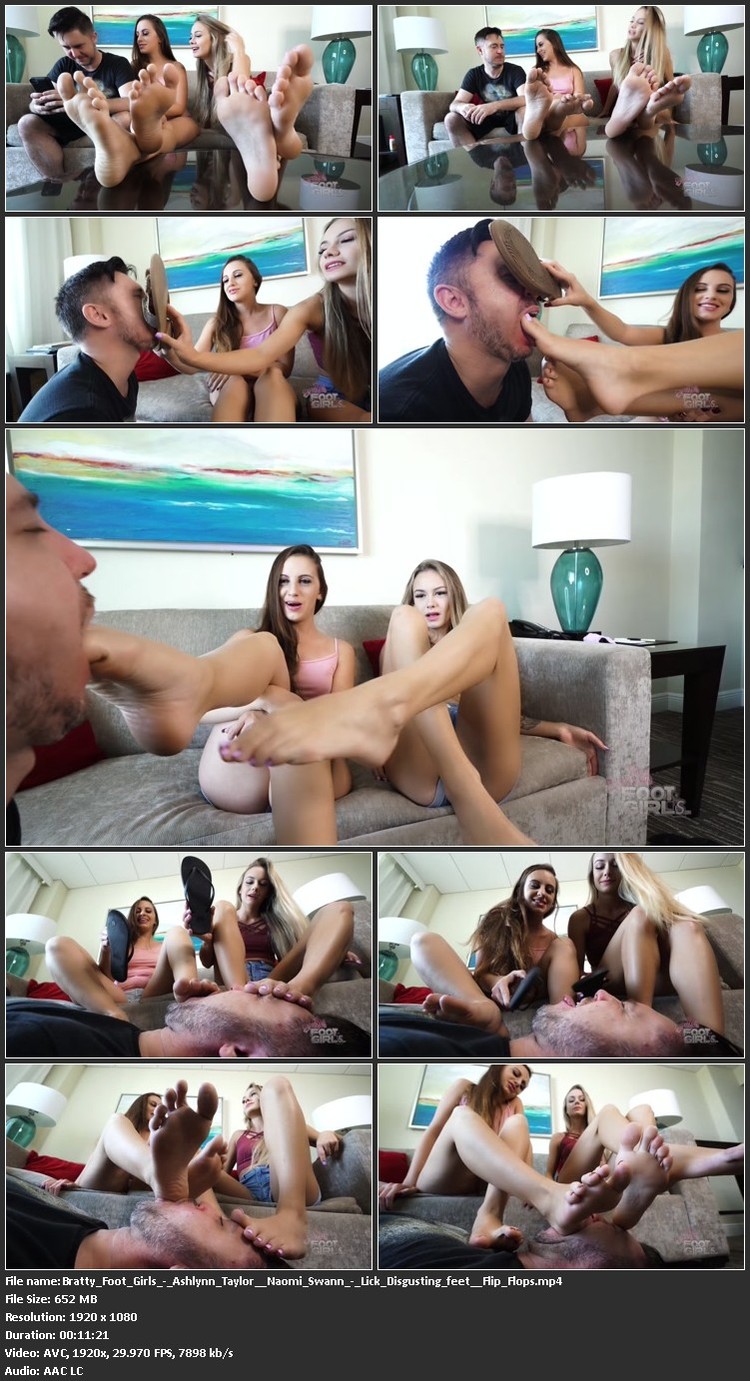