Kandy loves the power her ass has over her sub slaves. She knows they’ll do anything just for the opportunity to lick her ass, whether it’s clean, sweaty, dirty, or whatever. As the first scene opens, you get a full view across your screen of Kandy’s ass, pussy, and asshole. “Are you worthy of my ass?” she asks her slave while she kneels just off-camera. Naturally he replies ‘no’ because really, no ‘sub-natured’ male is ever good enough and they both know it. Nonetheless her slaves do amuse her and give her pleasure with their tongues, so she calls the pathetic creature in to devour her hole. You get a great view of Kandy’s pussy while the slave has his nose buried between her cheeks and his tongue deep in her hole. Kandy looks directly at you and says, “You would like to lick my ass, wouldn’t you?” She encourages the slave to have an active tongue and compliments him for doing a good job. “So close to my pussy but so far away,” she says as the camera zooms in tight on it.

The scene rolls over and we find Kandy outdoors enjoying a nature hike where She’s found a young guy to eat her ass. “I could relax like this forever,” she says. You get a brilliant close-up of Kandy’s ass as she spreads her cheeks, and you can see how nice and clean the slave has gotten her. Now we enter a third scenario with a third male. They’re a dime a dozen! Kandy has a young buck cuffed to her stool while she enjoys a snack. As she eats, he eats… her asshole. She asks him if he’s erect and the camera pans down between his legs to reveal a rock-hard dick. During the entire clip there are always closeups of Kandy’s hole as she spreads her cheeks between periods of ass-licking. She even mentions that she becomes tired of slaves and always has her eyes open for someone new. “Maybe it’ll be you,” she says, as she looks right at you.

The scene changes again with a new location and a new slave but always more ass-licking. Kandy is in the dungeon on the discipline bench, clad only in a bra and white stockings, with her legs up and a slave’s tongue in her anus. “The truth is that I usually have my ass licked several times a day,” she admits with a giggle. How convenient that she can send a message with no notice and have an ass-licker there to attend to her within minutes. “I like a nice wet tongue going deep in there,” she says. She tells you to get in close to see how the slave does it because that’s the same service she expects when she has you over to be her ass-licker for the day. “I want my slaves to have passion and love for my asshole,” she explains to you and naturally you have to accept that Kandy would never settle for just one ass-licker. You take your turn when you get the chance, no questions asked. You, on the other hand, should be devoted exclusively to her asshole. Again, Kandy has the slave spread her cheeks so you can see her perfect, pleated asshole. 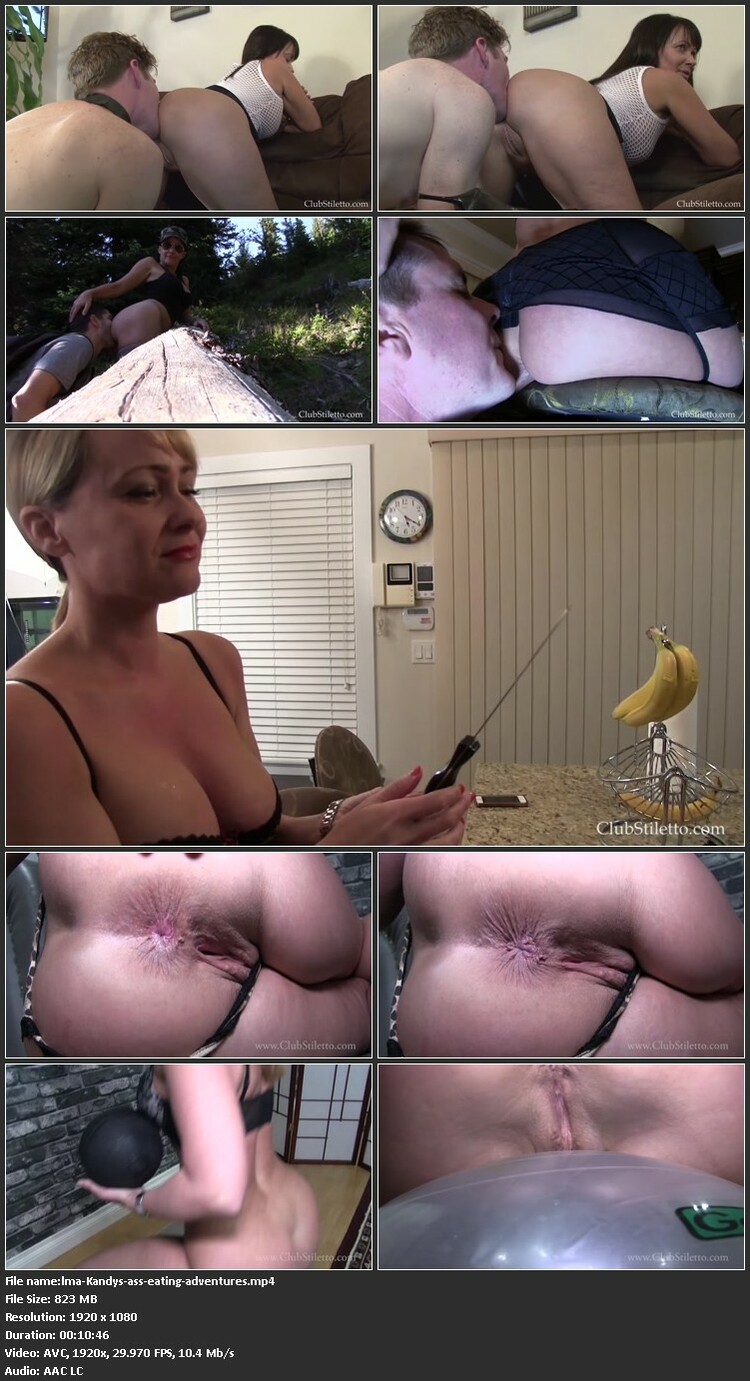