Devastatingly beautiful Miss Madison relaxes on her loveseat before she tests out a new slave, who will be working his way up from the bottom… as in the soles of her shoes. She snaps her fingers and the wannabe slave eagerly crawls to her. “These feet deserve a good pampering,” she tells him. She orders him to start on her shoes first and he’ll have to earn her sexy feet and toes. As the slave kisses her shoes, she says, “You have no idea where those shoes have been.” She directs him to lick the soles and then makes him suck the stiletto. “Isn’t it an honor to clean my dirty shoes?” she asks. The slaves replies ‘yes’ with his mouth full. She tells him she partied in the gay club a few nights ago with these shoes and adds, “You might be licking some stud’s cum right now, for all you know.” The slave is so desperate to please Miss Madison he doesn’t care what might be on those shoes. Impressed at how well the slave sucks her heel, Madison remarks that he looks like a natural cocksucker and she might just have to bring a guy home for him to suck next time. “You’d do that for me, wouldn’t you?” she asks and is pleased when he replies that he would do anything for her. Once the slave has licked and sucked both shoes and ‘all the nasty stuff’ has been licked up, she has him remove them for her. She glances over at you and says, “I bet you’d love to take his place.” You know you would.

Madison takes advantage of the moment to remind her slave that he can easily be replaced. The slave must sniff her shoes first before he’s allowed access to her feet, and she tells him she might let him sleep with them tonight. “It’ll be a threesome: you and my two shoes,” she says with a chuckle, and adds, “So pathetic.” She tells him she might have to lock him up in chastity to prevent him from touching himself while he lies with her shoes. As he sniffs the shoes, she waves her perfect feet in front of him and enjoys the aroma wafting from the shoes that even she can smell. “They smell divine,” she says. Finally, after five minutes of torment, the slave is permitted to put his hands and mouth on her feet. “I want you to lick and work the soles to loosen all the dead skin, and that will be your lunch. And for dessert, maybe I’ll make you my toilet,” she says, temptingly. She laughs when she sees how badly the slave wants that to be true and even suggests throwing in some toenail clippings as a bonus. She tells him to look at her as he licks her soles because she wants to see the desperation in his eyes. The slave busily licks her soles and sucks her toes, and she says that the more pathetic he appears, the more it pleases her. The camera zooms in on her other foot so you can imagine that you’re there to attend to it. She mentions that she might add you as a second slave and have the two of you compete for her attention. “A couple hours of this and I’ll be nice and relaxed,” she says. 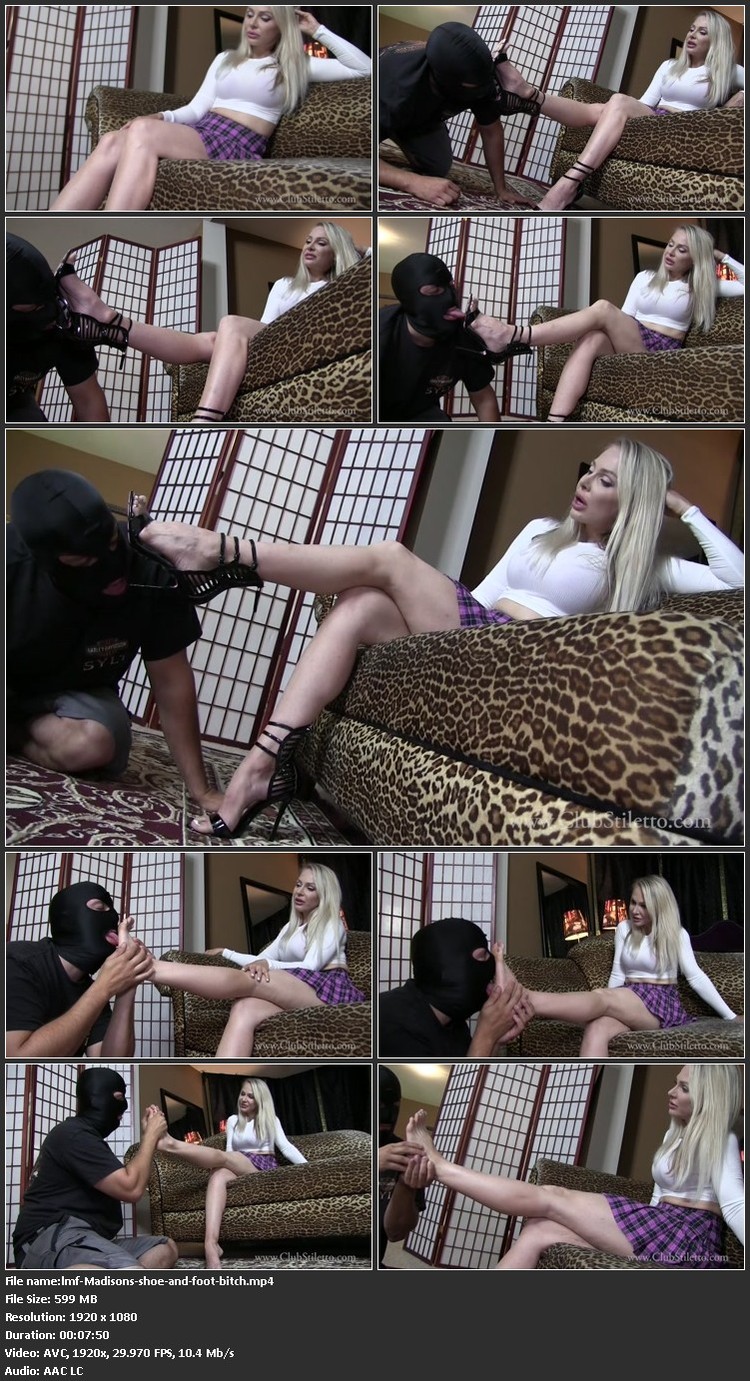