Sexy Ms Sinstress has just got home from a long day of sessioning and shooting. “The first thing I do when I get home”, she says, “is check on my piggy and see how he’s doing locked up in his cage.” She explains that she comes home and immediately gets him out of the cage for his daily beating. Poor slave waiting in a cage all day and the humiliation of only being able to oink when she asks him how he’s been doing. When he comes out you can see he has a gag in his mouth as well. She slaps his face and has him go up on his hind hoofs to prepare for her implement’s of destruction. She starts with a brutal thick wooden paddle and she tells him to oink if it hurts. He groans when she hits him but when he doesn’t oink she assumes it doesn’t hurt and that means he needs to be hit harder. Soon he is squealing like there is no tomorrow.

Next she switches to a smaller wooden paddle with a course surface. She strikes his ass and up and down his legs giving him some super hard ones to really make him oink out loud. How painful and humiliating. Next Mistress switches to a solid plastic paddle with holes in it which provides a whole new experience for the slave. No less painful though as his squeals indicate. She reminds him that most pigs get eaten so he should consider himself lucky. As he contemplates that, she gives him some strokes that lift him off his feet. Next is a leather crop and again Mistress strokes not only his ass but his legs. His pig ass is getting red and marked and gives Sinstress great pleasure. Now she reaches for a rubber paddle that in action looks like the wings of a bird and it is super effective in leaving its mark as you see how it literally molds to the slaves ass with each strike. The dumb creature is in so much pain he again forgets to snort and thus again gets it even worse. Finally Sinstress is done with him and the pig almost looks anxious to get back into the cage. “My boyfriend is on his way but if you’re a good pig I might let you out again tomorrow” she tells him, leaving the room and turning the light off behind her. The pig lets out one final “oink”. It’s not easy being a pig but so fulfilling knowing that your life is controlled in every way by a superior female. 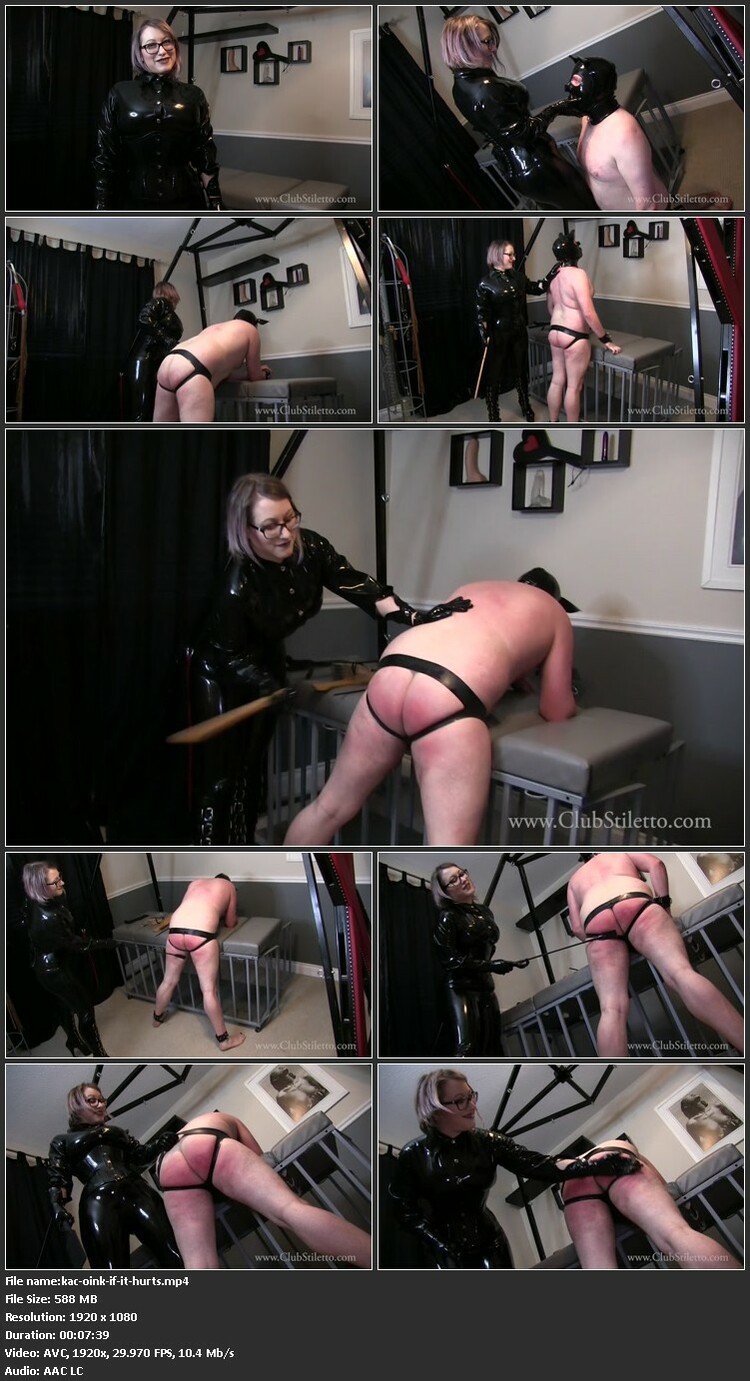