I’m coming home from My extended 2 month stay Florida and all is not well at home base. I entrust My slave to take care of matters in My absents and he turns into a completely unreliable asshole. The house is a pigsty! Things have not been cleaned in god know how long. I think this slave has just been jerking off all day and night, totally neglecting his responsibilities. I even had to take an uber home because no one was there to greet Me at the airport. Looks like without Me here to crack the whip, he reverts into and lazy shiftless male . So I find his belt and whip the daylights out of him! Yea then he suddenly wakes up and remembers… All these slaves are lost without the Empress to keep them on the right track.

The troubles are mounting for My slave like an avalanche. My room has mountains of clothing that need to be washed, dryed and put away. Obviously My slave is in over his head. Nothing is done, it’s even messier than when I left. Once again I need to re-train My slave to clean this place up. This is a pretty major task considering I’ve gotten a lot of clothes from My slaves over the years from My wishlist. If you don’t stay on top of things it gets out of control fast. I mean, I have 7 closets and they MUST be kept. This is one job where I can’t tolerate laziness. I take a random article of clothing and use it as a tourniquet on my slaves neck. When he wants to do My laundry as bad as he wants to breathe then I know he’s learned something. I spit on his stupid face and scratch is skin off just because I feel like it. This day really can’t get any worst for Me, but it can for My slave! The punishment has just started.

Well I finally figured out what My slave has been doing with all of his time these last 2 months while I was in Florida. While the cats away the mice will play. he found a box of old shoes I had planned on selling to My online slaves. Turns out he has been jerking off to them all day and night for weeks on end. It’s like he’s a drug addict or something. he is too ashamed to admit to Me what he does in private so I shame him by taping My shoes to his face while I punish him. If he loves My shoes so much I guess I’ll trample and walk all over him! Empress in boots is way better than empty heels with only My scent to remind him of Me. Turns out the time I was gone, My slave turned into a real pussy wimp who can’t even take a decent trampling. So Me, being the nice Empress I am, I give him an alternative: a nice sweet BALLBUSTING! he loves My feet so much I’ll give him more than he can handle.

The bathroom, the last bastion of American freedom. Keeping it clean is a dirty job but somebody has to do it. I continue to inspect My house after a long time away and of course the bathroom is as filthy as My slave. he had his chance to clean it like a normal person but he blew it. Now he has to lick it clean! I force him to clean the bathroom with his tongue. I need to re-train My slave to do even the most menial of tasks now. If I’m not here grinding his face into the porcelain, it just won’t get done right. I can’t even use it so dirty. I turn My slave into a human scrub brush and make him clean. But I’m not going to make it all work I’m going to have fun making him work. I flush his head down the toilet. That always makes Me laugh HAHA. It’s where he belongs anyway. 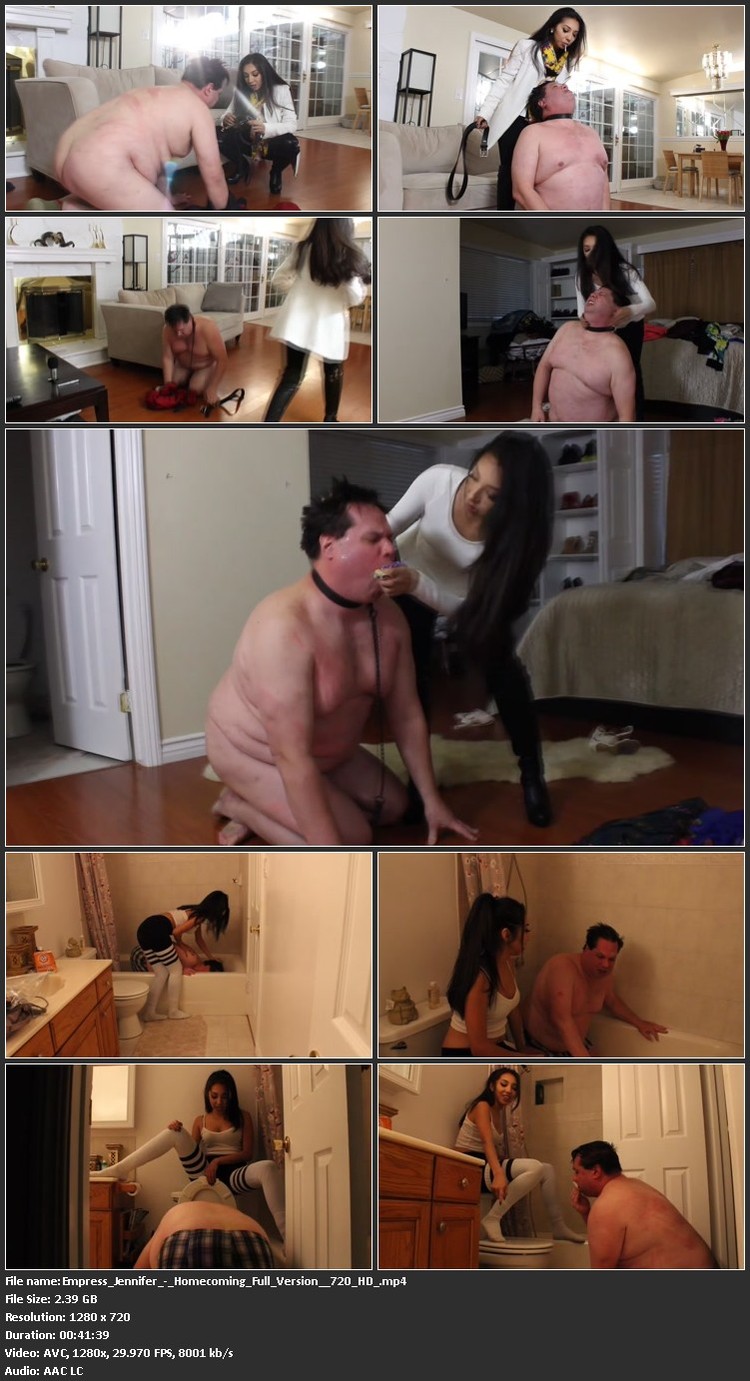