You’re pretending that you’re working out in a gym and this guy comes to you being sexist. You challenge him to a fight and he learns a valuable lesson.It starts with you working out doing exercises on the floor. You’re wearing a white tank top and long gym pants and sneakers and socks. This short guy (with gym attire on but shirtless) comes up to you and says this. Guy: Hey times up. You: Excuse me? Guy: See I always workout in this area around this time. You got to go. You: I don’t see your name on it. Guy: Im not going to tell you again. Leave! You: Make me. Guy: Oh Ill make you. See you’re a woman and Im a man . We are always superior. You: A man? When I first saw you I thought you were a . Guy: You think thats funny? You: Yeah I do. Tell you what, since you’re such a man and you’re superior you wouldn’t have any problem fighting me for your little workout spot? He laughs. Guy: You challenging me to a fight? You: Thats right. You beat me I wont exercise in your area again. If I beat you then its my workout spot from now on. Guy: No way. You: Whats wrong? Scared a woman can beat your ass? Guy: Just leave. You: Im not going anywhere. Since you interrupt my workout Im going to have to finish my workout on you. Guy: Are you serious?You then walk to the open area where theres a mat place on the floor. You: Im waiting shorty. You then do the figure gesture telling him to come on. Guy: Ok you got it. He walks to the mat. You both start stretching. You then start taking off your shoes and socks. Guy: What are you doing? You: Got a problem with this? Guy: What? You’re going to stink me to ? PU. You laugh. Guy: Your’e not going to strip in infront of me are you? You: You wish. Come on lets see how strong you are Mr. tough man. Guy: You ask for it.You both go for the test of strength and you force him to fall on the mat with ease. He looks surprised. You: Want to go again? He gets up and tries again and you throw him. You’re walking around saying, You look small from down there He gets up, growls then grabs you from behind. He tries to throw you but he’s too weak. You grab him in a headlock laugh then give him a nuggy on top of his head then throw him to the floor. You: Thats all you got? He’s looking really frustrated; he hesitates then charges after you. You kick him in the stomach then scoop slam him on the floor. He yells in agony. You then stomp him on the stomach then on the face. You plant your foot right over his face and say, You like that? Oh not so tough now Mr. Macho man. You then put him in a head scissors. You got it in real tight. He starts tapping. Oh were not done yet. You get up and take a breather while looking down at him. Then you tell him to getup! You pick him up and (if possible) lift him up over your head. He blurts out whoa!! You: I could easily break you in half, but since Im in a good mood.You then let him down gently. He’s on the floor gassing for air. You squat down and tell him, You give up? Had enough? He says, Yeah you win. (You stand back up). You: Goes to show you that not all women are weak and defenseless, especially towards little twerps like you. As soon as you turn your back he gets up, growls and runs after you. You quickly lay flat on your back and catch him with a kick to the balls. You say, I guess you didn’t have enough. You then grab his arms and leg press him in the air. You tell him, How does it feel to be defenseless and weak by a woman huh? You press him numerous times in the air then hold him up. The camera shows a close up of your feet pressing his stomach. You then say, My legs are stronger than your whole little body. How pathetic is that? I could easily spin you around. You then let go of his arms but you’re still pressing him in the air while his arms are spread out. You then throw him over with your legs. You get back up and look down at him. He’s on the floor on his back . You walk away. 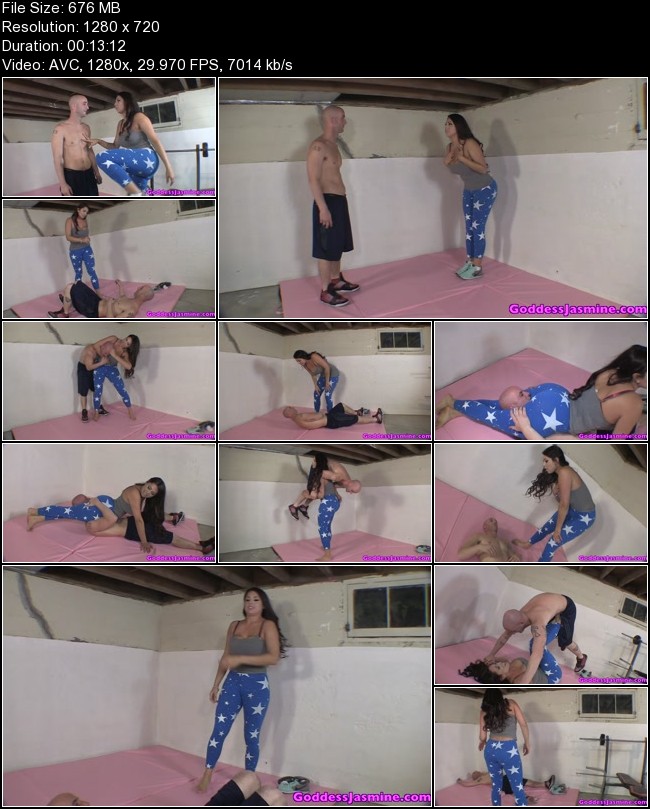