The weakling Pete has his dream of wrestling Maria Jade the pretty gymnast naked made a nightmare as the tiny guy gets submitted like a bitch throughout. He is so overwhelmed he is unable to enjoy her nudity through his tapping, whimpering, pain and humiliation and that’s how Maria wants it. A front headscissors in which she tells him “Fuckin’ tap, pussy.” She pours the power on with her rock-hard legs as he goes to rest and wakes to a slap, telling him to get his face out of her pussy. He is getting destroyed in her legs; deep in her bare pelvis he is purple as Maria crunches the power on the beautiful headscissors — telling him “Tap, motherfucker.” A front figure-four headscissors. Pete whines in pain. She kicks him away like garbage and mocks his crying. “Nobody gives a fuck,” she tells him. She kisses her bicep on her ripped body. She makes him wrestle her, wrings his neck and throws him down. He fights like a bitch. She pins his hands behind his back like a cop then throws him down. He praises her strength; she calls him weak. Suddenly, his trach is getting flattened as she takes his back and cranks it on. “Tap like you mean it, pussy.” HOM. She debases him, tells him “nobody likes you; nobody gives a fuck about what you like.” She hates that he never shuts up. She flexes her incredibly cut calves, slapping them proudly. They are some of the most defined calves in the thing of ours, making us recall Chi Chi and her superhumanly ripped legs. She wrestles him, making him tap wildly in a standing guillotine, mocking him for his praise again. She taunts him; wraps him up on the ground clamping on a bodyscissors and pulling his head into her chest. A reverse headlock; she counts down to his tap, calls him a weakling — says he’s short and pitiful; she can kick his ass and she knows it. She jumps on him, crashing hard down on his gut. She shuts him up sticking her foot in his mouth, ordering him “Lick it!” in his ultimate shame. A vicious figure-four headscissors, more straight headscissors, a double foot choke as she pushes him to fight back. She kicks him in the throat as he tries, a break. She stomps him as he drags himself back; she locks him back up in bodyscissors, mocking his agony and how she is “just chillin'” while she causes it. She nearly twists his dick off while cranking on a bodyscissors and verbally humiliating him then walks away barebacked, flexing — the addicting, the naked Maria Jade leaving a small and beaten man behind her. 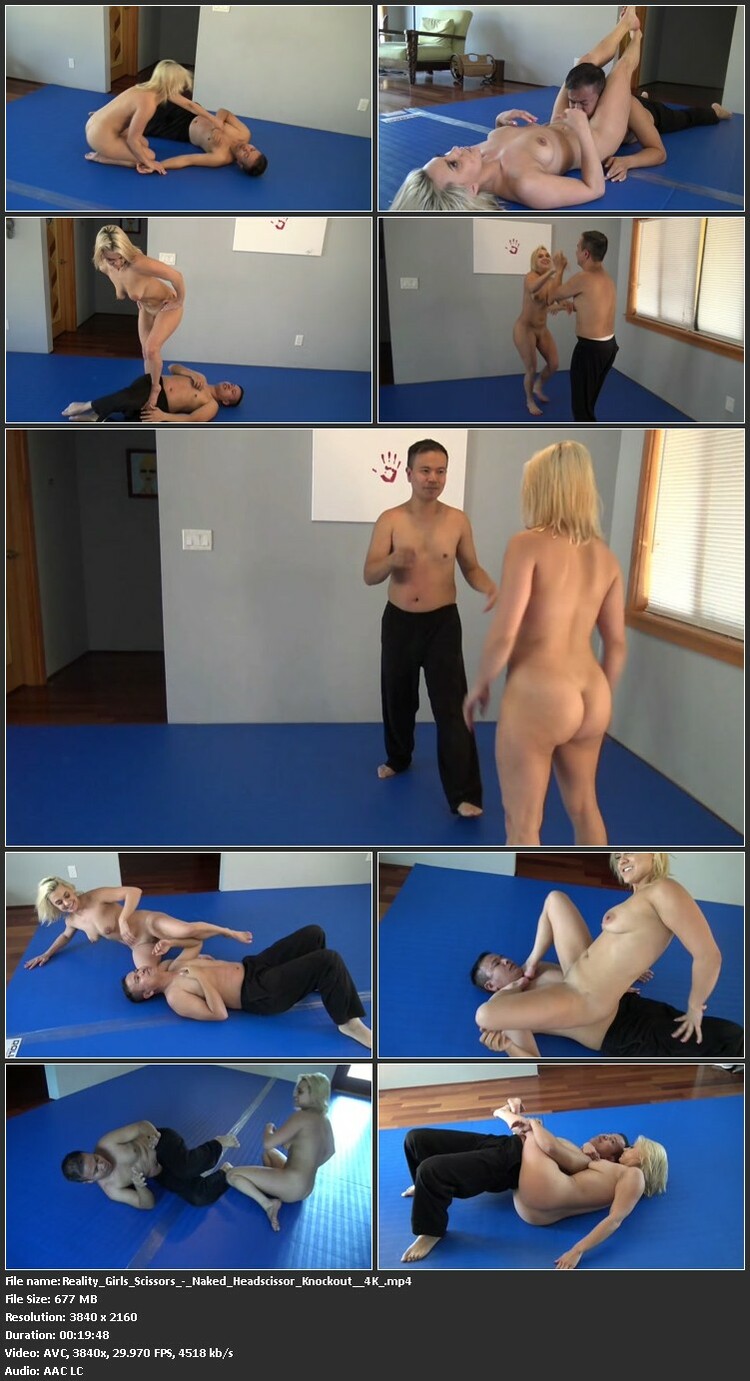