Andi Page has among the greatest headscissors ever. It is nearly impossible for anyone to suffer long in the intensity of Andi’s legs, which seem to get bigger and more able to create cartoon-like headscissor consequence each week, month — as though her legs are some other than from here. Brand new guy Tommy has never been headscissored. He is big and tough but not overly thick and she overpowers him easily with her straight headscissors. He hangs in better in figure four headscissors — but not much at first as he is tapping and coughing and purple as Andi tells him “pain is temporary and her ankles “Snap!” together the way they do when she locks on a straight headscissors — it’s like other famous sounds of athletics and it’s all hers. She sinks him to the mat in brutal rear naked chokes as the tough guy lets out big bursts of pain — his chest heaving. Andi has to cross her legs in a standing headscissors. Everyone — every one who’ll still allow her to headscissor them — tap out in headcrushers before she can cross her ankles. It’s a whole thing. Her legs are inhuman. Reverse headscissors. She twilight rests him in her RNC but he’s not all gone. Brutal reverse headscissors — another of Andi’s brutal figure-four headscissors as Tommy is tapping still. A vicious Figure 8 into more brutal straight headscissors that have him hacking and coughing as the gym addict taps like an auto crusher has his neck as the greatness of Andi Page’s headscissors fills the camera. A reverse headscissors — more taps and then; he taps on her ass. Andi is angry. “Don’t tap my ass I’ll pop your fucking head off.” She seems nearly to keep the promise and he needs another break from her Hall Of Fame legs that are slapped by Tommy like they stole his car — wildly in the pain and pressure of the superstar. his neck feeling like it will certainly separate. It’s Celestial’s first time seeing Andi on the mat and she smiles her perfectly wide smile at the skill and power with which her friend controls the big and tough man; into Andi’s reverse seated double heel choke. More head swallowing figure four headscissors have him purple as she drops the Soles of one of her shoes on his face, telling the tough guy where its Sole has been in thrilling dominance and brutalizes him in more straight headscissors. Andi’s Japanese figure-four stuns him. He’s hacking and coughing. Her hamstring choke — more RNCs as he falls back shaking and she laughs that she had him, and let him off the hook. Then a brutal moment in headscissors Reality — the young superstar slaps her legs and powers on a front headscissors that makes the big man scream. A brutal camel clutch. “I don’t wanna break his back,” she casually says — then almost takes his neck out in a twisting reverse figure-four headscissors. “One more scissorhold?” she asks and he says yes and he hangs in as long as he can — his jaw shifting as he shakes from her power. Then one more rear naked choke that has him in the mat fighting like a warrior to stay in, making awful noises as he has to be released from the legs of one of history’s greatest headscissor artists here among us today and one tough fucker lucky to say the same as he promises more next time but quits after 20 minutes of the headscissors of the great Andi Page … 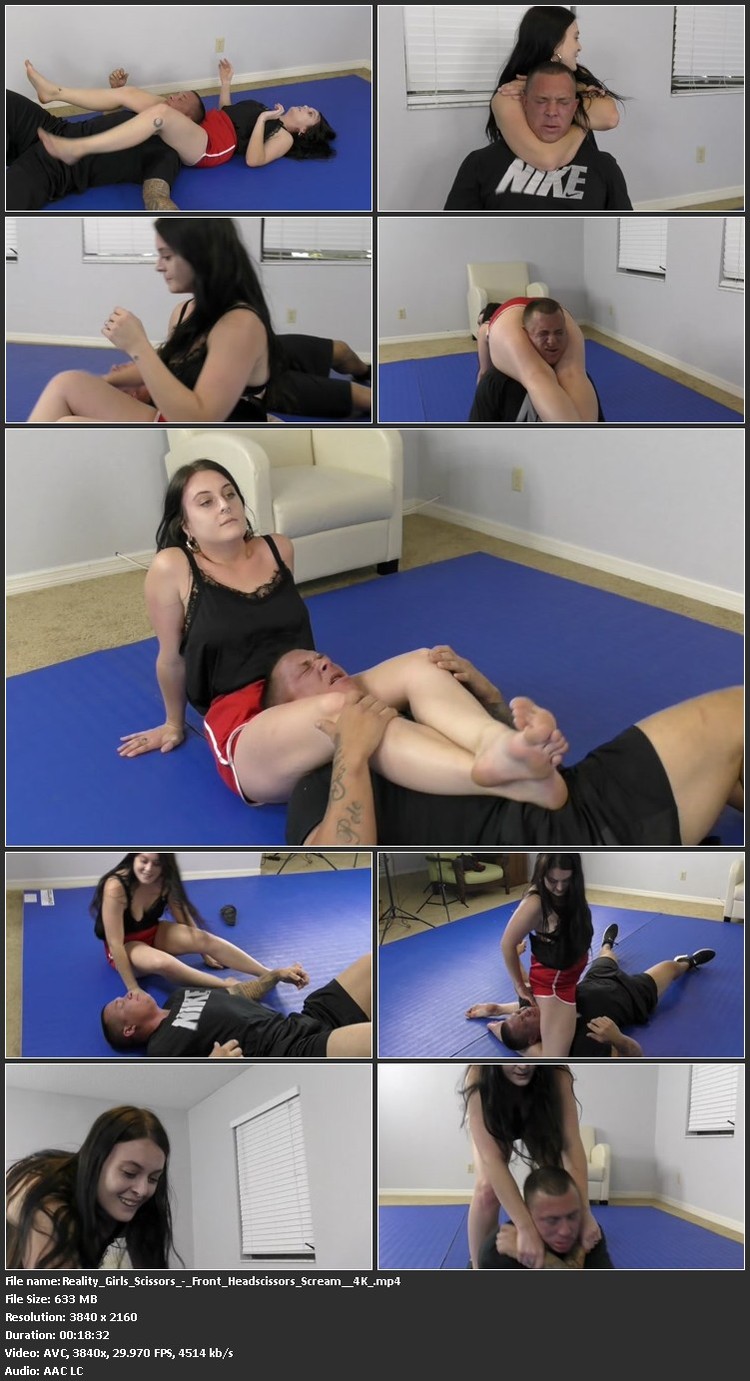 Andi Page, the girl with the legs of stone, tells Charles she should be praying to her if he’s praying approaching her then the vicious black-haired beauty puts him to sleep in the calf-choke figure-four used often in Japan that is becoming a terrible tool for the scissors superstar. Here she shows the hold to a curious Riot who remarks at his face as Charles goes to bed in the hold — muscles busting out of Andi’s tight black jeans. Skullbusting headscissors. Riot covers his mouth with her foot as Charles sleeps again. Andi’s answer is to heel him in the stomach until she feels him flexing then lean back and make him scream in the headscissors again. She facesits him as he screams into what Riot points out is one of the best asses anywhere, raining kciks into his gut. She laughs as he gasps in her throatscissors — what fellow superstar Mikaela calls her “anaconda” Back into the figure-four calf scissors. No one has any chance in them her enormous calves and her skill. Riot praises how good she is at the hold then gives him a break awake by pressing her sole of her Size 10 over his face and mouth. He’s beaten – -face down on the mat as she whips him with what Riot calls here “the Charles towel” as Andi snaps his bald spot so hard with the towel he begs her to stop. Andi asks him if she’s a bully. He screams in side headscissors before snaking her huge calf back under his chin. 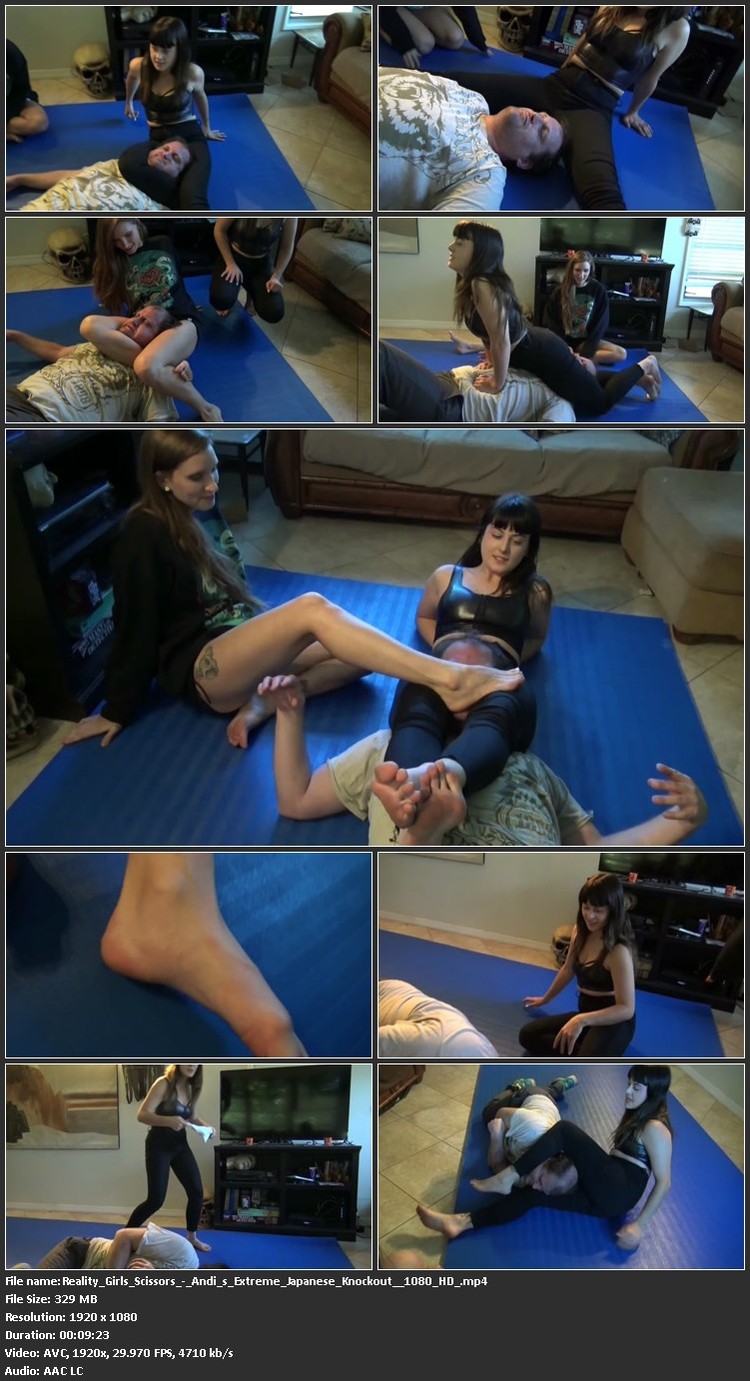