– FULL MOVIE –
This is an experiment: We invited Sarah and Larissa, two random girls to use and humiliate a human fooststool how they want.
We never met this two girls before in person. Only that we knew is that they had a submissive roommate who was their slave. They used him for housework and financial domination.
Like mentioned. We never met this two girls in person, they applied and we invited them to spend a evening with using and humiliating our human footstool slave.
We start filming before the girls arrive. The slave is at his place, the drinks and cigartettes are ready. And than the Sarah and Larissa enter the flat. This is 100% Real Femdom.
We had no idea what to expect. But what than happens blows every slave mind. Sarah and Larissa start immediately to humiliate him.
They they take the drinks and take off their heavy boots. „Now it`s time to worship some sweaty feet“ The girls laugh and humiliate him extremely.
The girls drink more and more, and the verbal humiliation gets extreme. They start to smother his face with her feet and also to trample him together.
Sarah and Larissa have so much fun. The drink, smoke and humiliate him this loser extremely. A festival of extreme foot humiliation and verbal humiliation 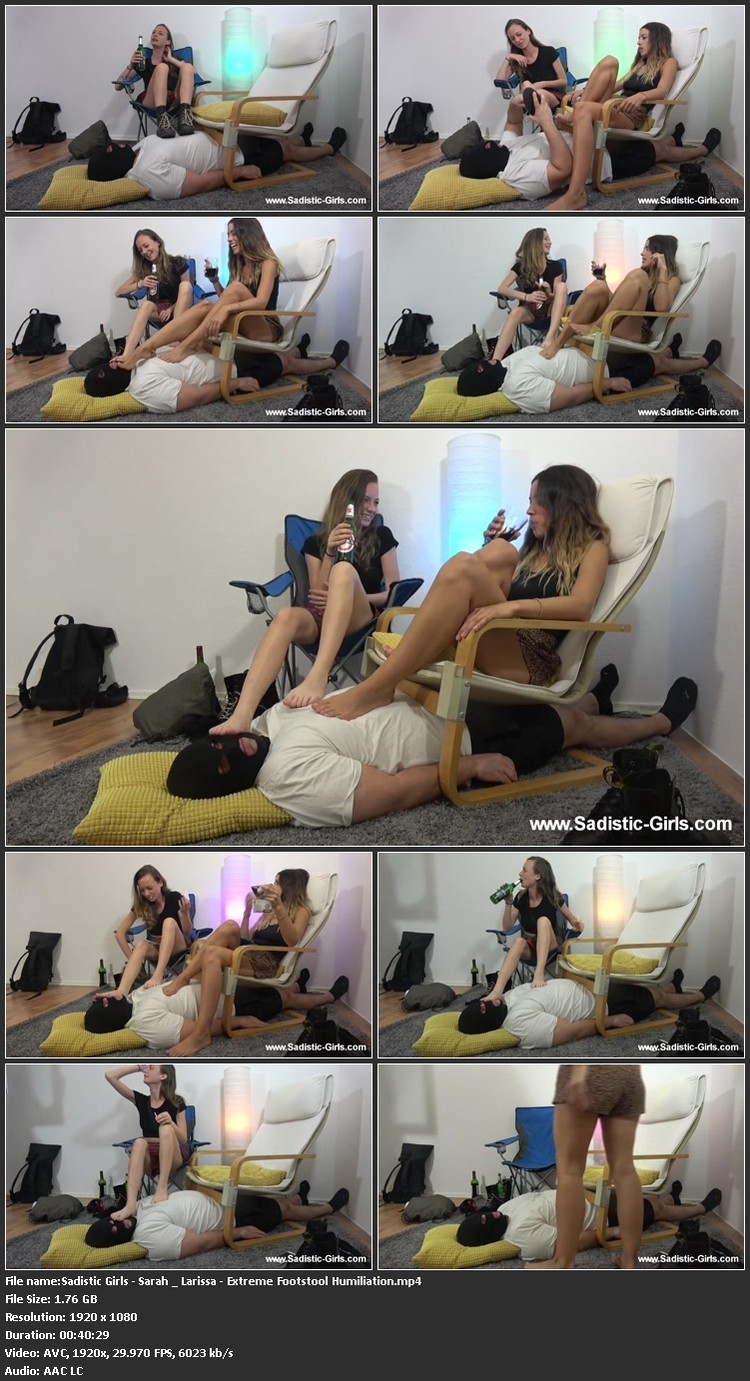 Arriving home from the gym, I am more than ready to put my male slave’s mouth to use. Still dressed in gym wear, I have him kneel before my trainers whilst I explain what is required of him.
My pretty, little size 3 feet have been sweating away in my gym shoes all morning. I want them cleaned.
Carefully, I instruct my slave to remove my shoes and sniff the sneakers deeply. Shoe sniffing is only the first treat this eager slave is rewarded with. Soon he is slowly peeling down my trainer socks, to reveal elegantly manicured bare toes. My soft pale skin and wrinkled soles are so inviting.
My desperate slave cleans every inch of my perfect feet and high arches. Sucking toes and pushing his tongue into my toe gaps to ensure they are spotless.
But am I pleased with his efforts…? 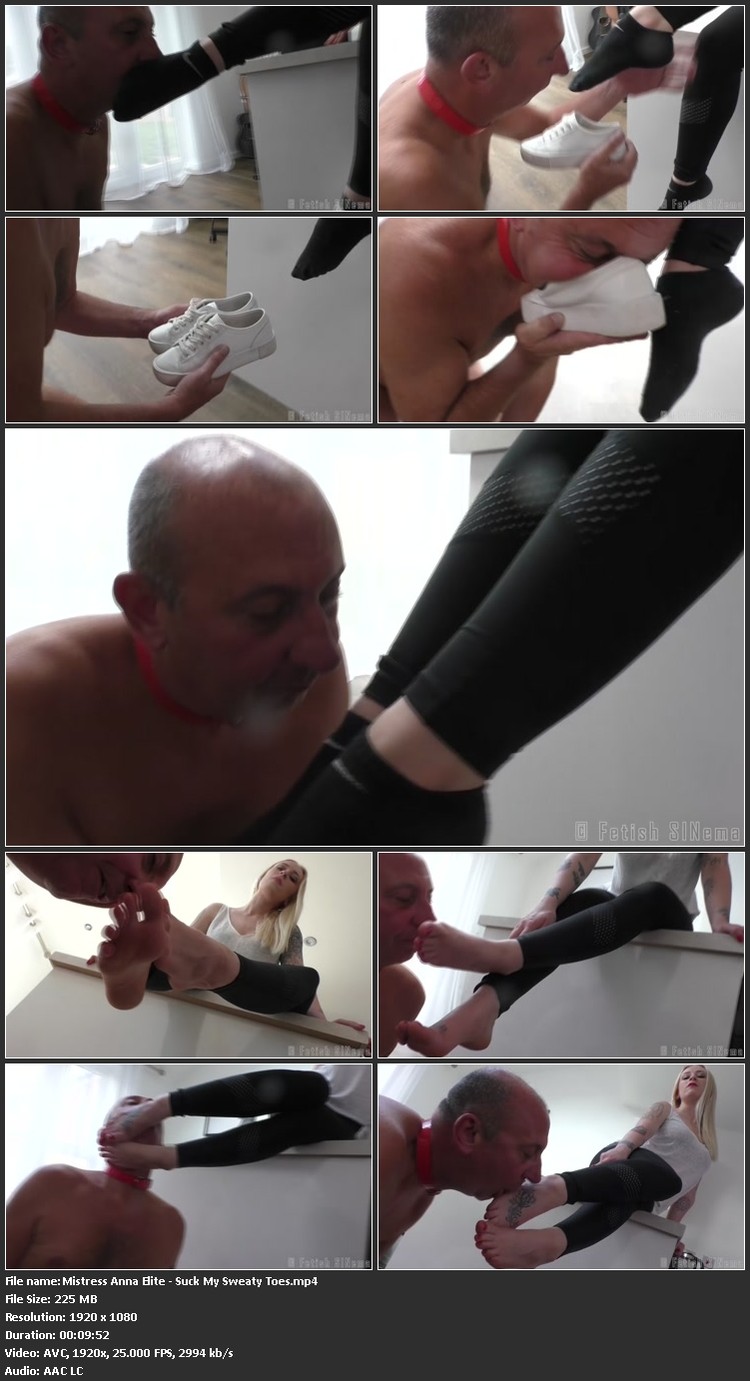 Mali is an off-site student who has rented a room in the house of Ale and Matilde, who are married. The married couple treats Mali arrogantly, making her do the housework in addition to the rent she pays them. The time for revenge has come! Mali has witch powers and uses them to take revenge on those who treat her badly. Using a pair of her sweaty stockings, she has created a love potion ( like a perfume ) that creates an irrepressible desire in those who smell it to smell and kiss her feet and make them fall in love with her. The first one Mali wants to take revenge on is Matilde. Mali sprinkles some of the love potion on her wrist. Approaching Matilde, with the excuse of arranging her hair, Mali approaches her wrist to Matilde’s face who breathes the love potion. Immediately Matilde’s attitude changes and she starts telling Mali that she is beautiful … that she wants her and that she would do anything for her. Mali smiles and taking Matilde by the hand, brings her to Alessandro, who is on the couch and text her cell phone. Mali sits down next to Alessandro and makes Matilde kneel in front of her. Mali tells Ale her wife will kiss her feet; With his usual arrogance, Alessandro refuses but Mali makes him smell the scent of the love potion too and Alessandro immediately accepts whatever Mali says. Mali starts massaging Alessandro between his legs and kissing him on the neck, sending him into ecstasy, while telling Matilde that she is a cuckold. Succubus of the love potion, with a monotonic voice, Matilde confirms she is a cuckold and smells Mali’s feet still wrapped in sweaty socks. Stunned by Mali’s magic potion and aroused by hands and kisses, a sperm stain grows through Alessandro’s pants as he, dumbly, says that his wife is a cuckold and that they will be Mali’s slaves throughout the life. Increasingly satisfied, Mali orders to matilde to take off her socks and to smell her bare feet. Satisfied with having had her revenge on Matilde, it’s Ale’s turn. Ale has always prided himself on being an Alpha male by treating his wife with disdain and treating Mali like a silly girl. To punish him, Mali orders him to humble himself at his wife’s bare feet while she keeps him in a constant state of arousal by touching him between his legs and kissing / licking his neck. Matilde sits on the sofa next to Ale; following the orders of the Mistress, Alessandro begins licking the feet of his wife, while Mali reminds him that women are superior and that he must never allow himself to treat his wife badly again. Finally, to put the seal of her supremacy over the couple, Mali returns to push her feet over Alessandro’s face, ordering him to lick them, masturbating himself. While Matilde continues to excite her husband with her tongue, Alessandro masturbates himself, cumming on his shirt while he licks the feet of the little mistress. 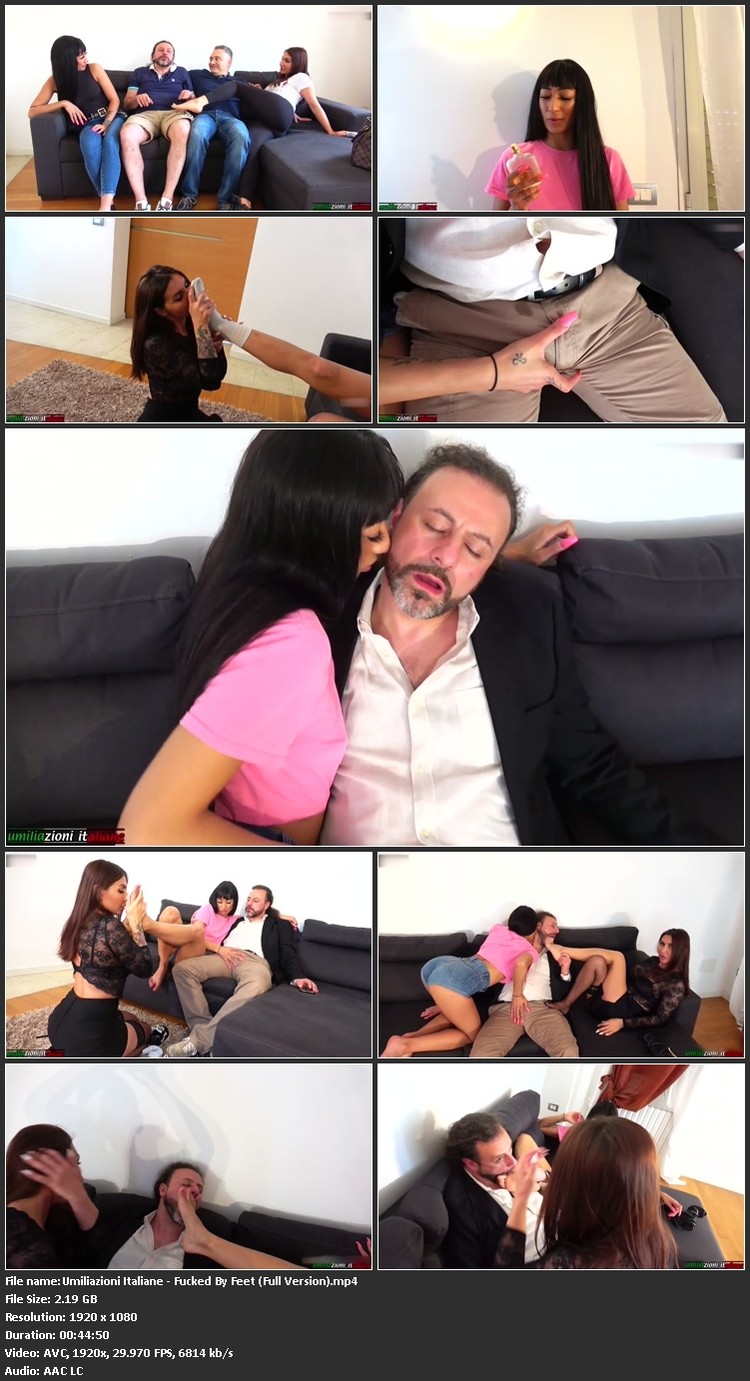 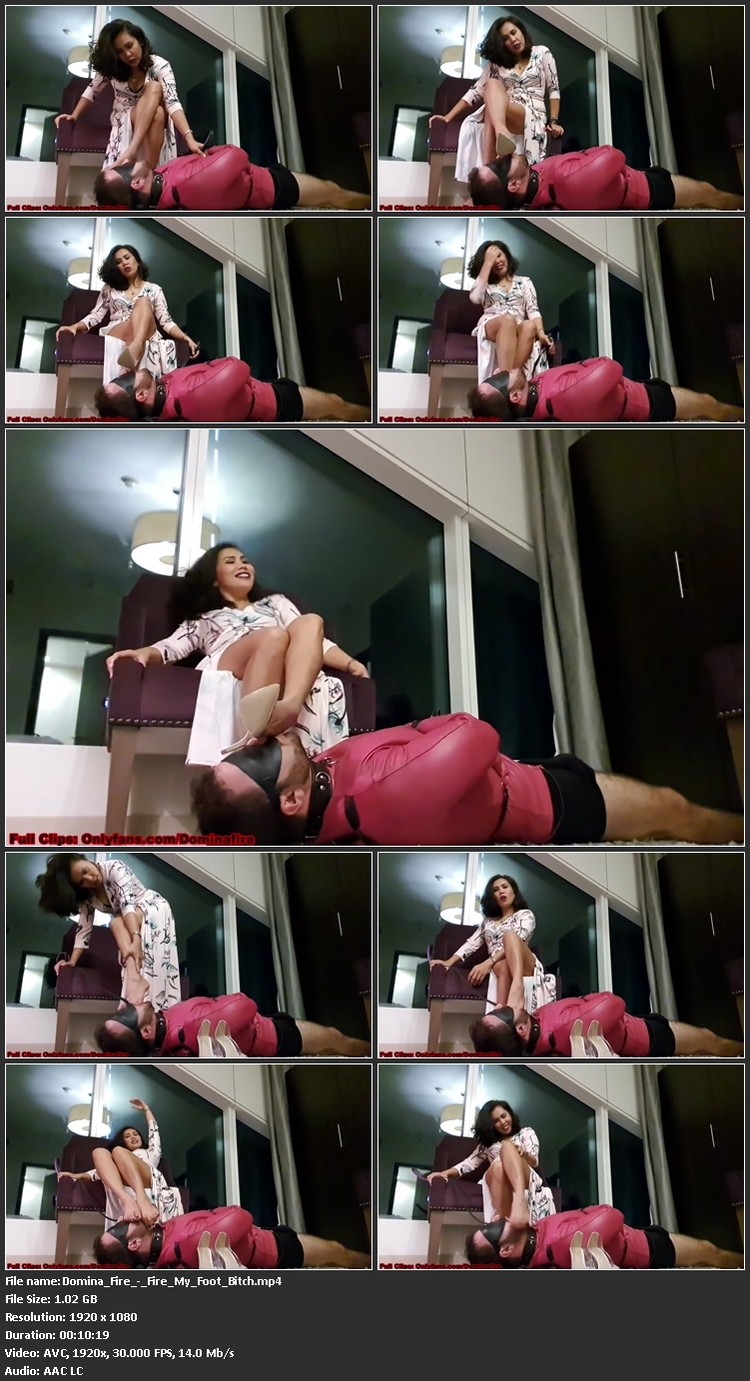 Bringing back a classic BFG storyline! Onyx and Mia are playing a new game that’s just come out on the app store. Jason seems interested in playing and shows some bravado. They decide to up the ante and offer a bet. Whoever loses the game has to do whatever the other two want. The three of them start the game and before Jason knows it, the two brats have already won the game. Now they tell him to stand up and close his eyes. He does as they say and before he knows it his hands are tied and mouth is taped. The brats then make him get on his knees as they peel off their stinky sneakers and shove them in his face. The smell is overwhelming as he can’t believe his two friends would do something so humiliating to him. The cheesy vinegary stench is rubbed all over his face. They pinch his nose between their toejam filled toes as he has to huff them over and over again, they use him like a foot stool as he is completely turned into their foot bitch. 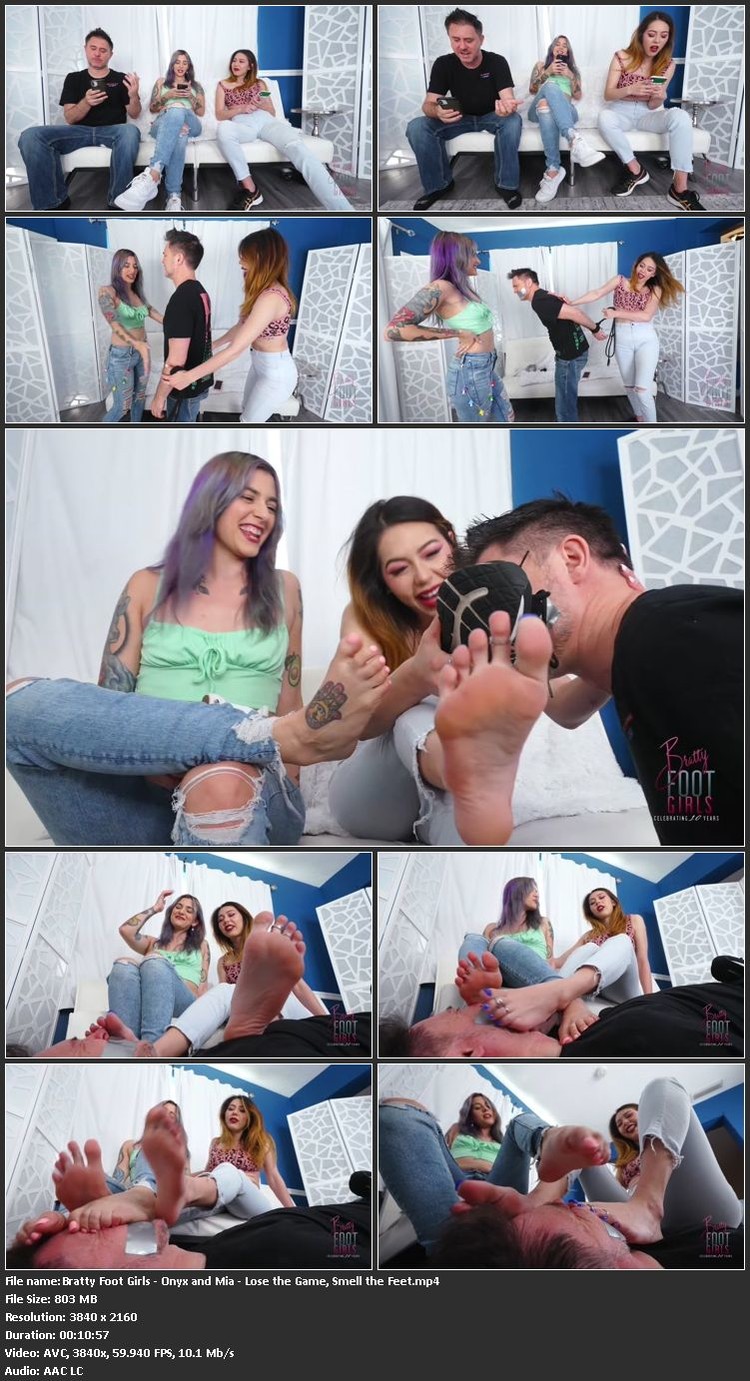