Our Beloved super sexy Safa is giving another helpless guy the time of his life! In this episode Safa jumps right in teasing and playing with her new boytoy in her sexy dom outfit, pantyhose and heel’s he stayed in a daze from soft touches and vicious triangles that never let him go without a quick nap! Dazed and Confused Safa leaves yet another Male Victim. 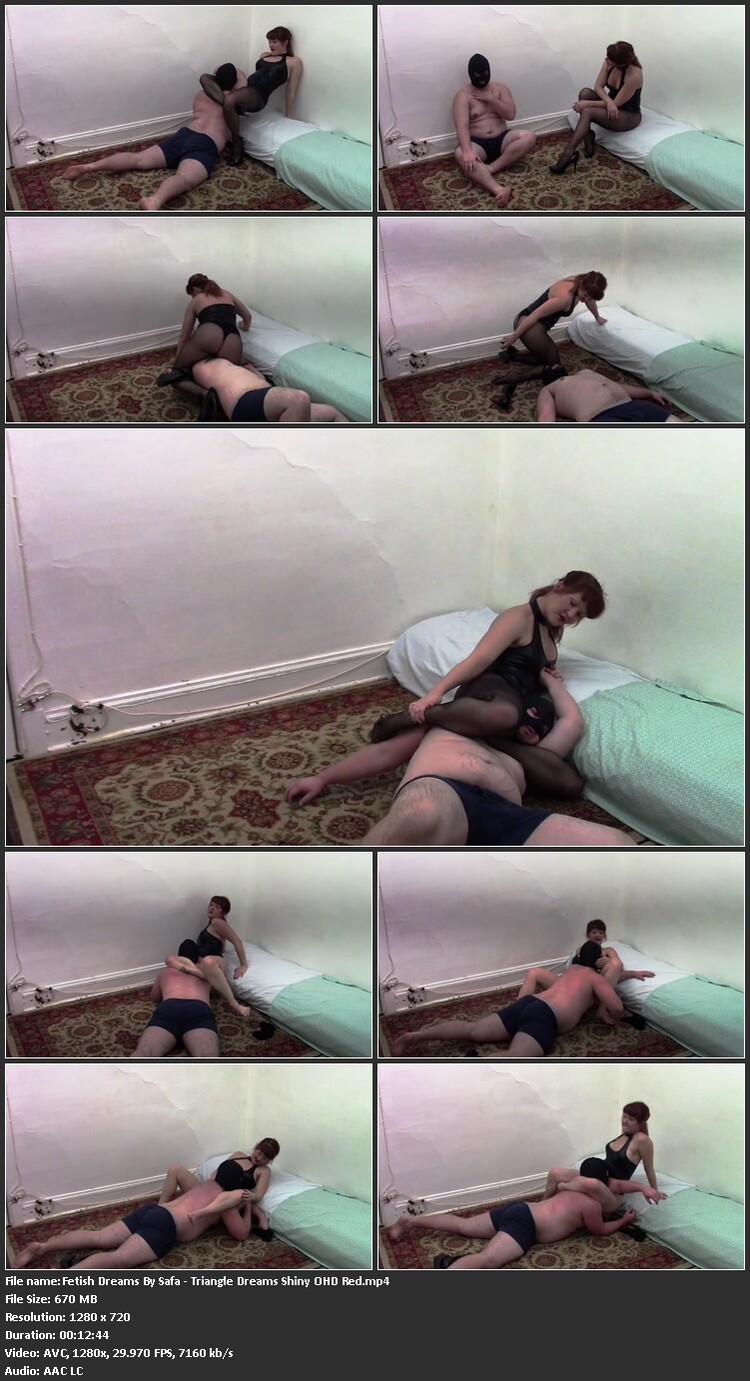 Fetish Dreams by Safa brings to you once again a new favorite beat down series triangle dreams. Starring SHEENA. all Triangle Holds in a sexy tight dress all for the purpose of and dreams:) 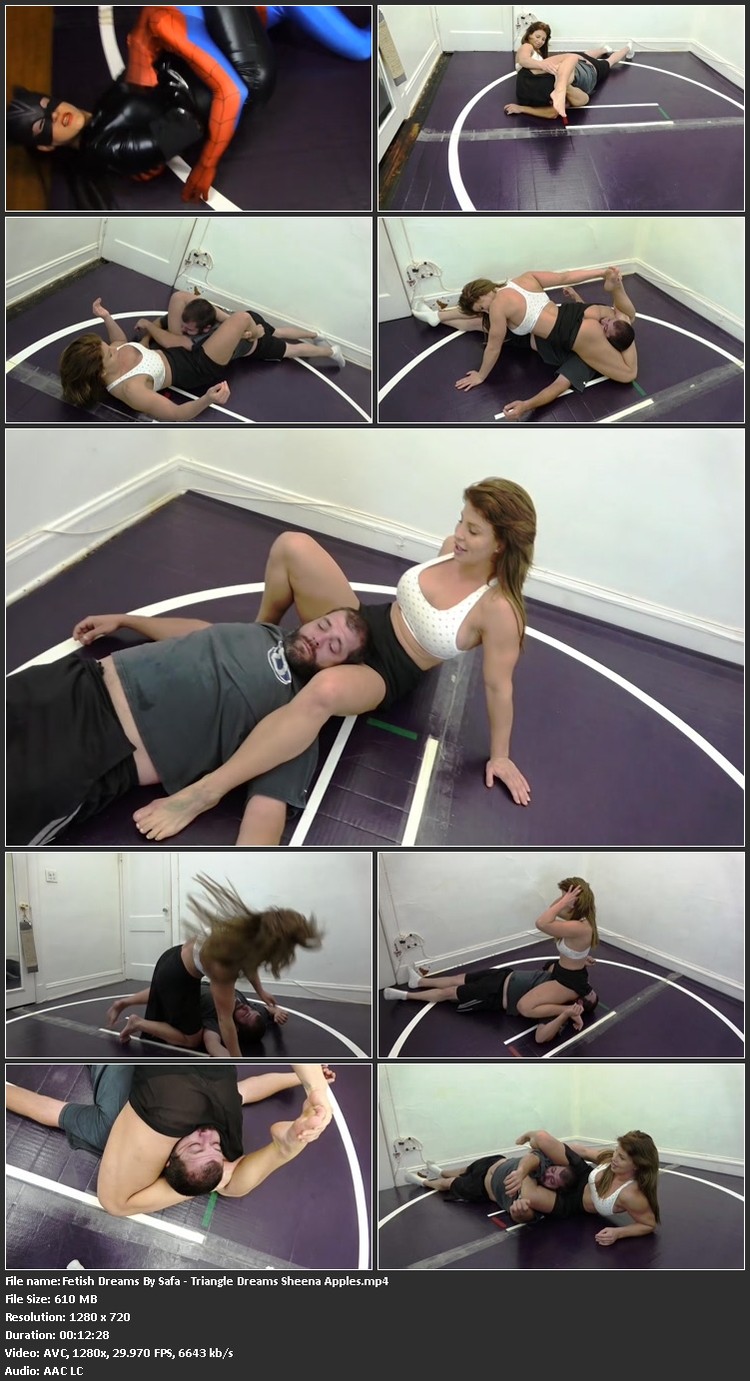 Hannah, a 23-year-old powerlifter and cheerleader with the face of a TV star and legs that press 600 pounds, is introduced here with maybe the most impressive debut we’ve seen in more than eight years. A total natural, Hannah quickly heart punches Chet before locking him in a perfect rear naked choke. When she pulls up and says “But I don’t wanna let go,” as he chokes it’s clear she’s an instant superstar. Brutal headscissors applied with total leverage as her big quads makes him scream and tap. A rear naked choke puts him to rest at her feet but she has no mercy and almost pops his brain out of his head with another, then another. We didn’t want to stop filming thinking too long of a break would mean Chet quitting, but he takes inhuman pressure in the agonizing action. Hannah is so strong. She pours on a side headscissors and won’t stop despite his tapping. She steps on his hand and arm. She’s fast. Before he knows it her arms are snaked around his neck again and he’s fast resting again, even getting her worried as he snores. Her abs are incredible, flexing as she pours on her perfect headscissors that so expand her quads they look as though they’ll swallow his head. She taunts him for how much he suffers in her rear naked, this girl with the All-Star smile. More headscissors. A cheerleader stance in a standing headscissors. She pulls and pushes him to the mat with the ease of a girl with tremendous strength. She tells him he has a crazy laugh then takes his back saying “Fun’s over,” pulling up on another rear naked choke. Hannah is a smiling sadist, catching him in a rear naked then biting her lip as she wrings his neck in the hold, smiling at the camera before pulling up again in hurting him. he picks her up and spins her at her invitation and wow, does he pay for it as she spins, applies another perfect rear naked choke and puts him to rest. She goes to put another RNC on him, tells him his eyes are still rolling back in his head and asks if he wants to keep getting put to rest, saying he must like it. 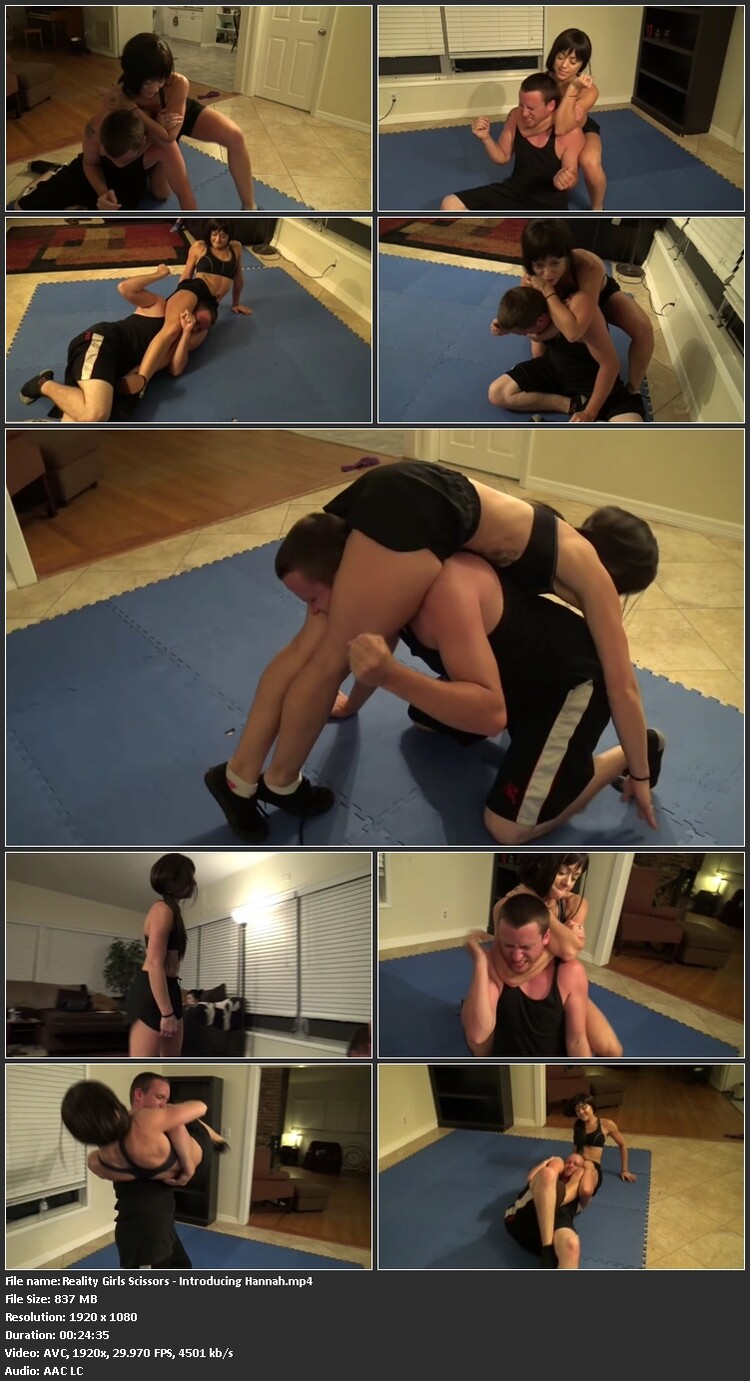 Note: This video was a custom in which the customer wrote us back a few days later saying…”Wow…that was intense! I actually started to feel bad for the guy!”.
It was one year ago that we were introduced to Janira Wolfe and it was at that time Janira Wolfe was first introduced to leg scissors during our shoot.
Many times, when we first introduce a girl to scissoring, it’s the last time they scissor anyone until we shoot them again. But not Janira…she’s been CRUSHING helpless boys into submission, and knocking them out too, with her lean, powerful dancer thighs ever since!
When we caught up with her at the annual Fetcon convention she couldn’t help but let us know…”My legs are MUCH STRONGER than last year…I could literally TERMINATE a man between my thighs now!”.
Folks…with legs like Janira’s, along with the kind of enthusiasm she has for squeeeeezing the daylights out of men…it’s a DANGEROUS combination!
In fact…at a pre-Fetcon pool party, Janira gave Drew a taste of her LETHAL REVERSE HEADSCISSORS off camera and had him tapping out in seconds! It would have been LIGHTS OUT had he not been quick enough with his tap hand!
Like many on the scene today…Janira Wolfe is one more lethal legged lady unleashed upon the world by ScissorVixens!
And as a popular Fin-domme, and producer herself, Janira gets a lot of men e-mailing her begging to be her full-time slave.
Of course the vast majority of these men are located hundreds of miles away who have no intention of actually becoming her slave but have no problem trying to engage her in an endless back-and-forth e-mail session.
Most experienced dommes can smell these time-wasting clowns a mile away and quickly put an end to it but this time, Janira decides to make an example out of one of them on camera for all the other time-wasting losers to see!
“I need slaves to help me with my workouts!”, she tells the camera as she slowly increases the pressure around her panicked slave’s neck!
Watch as she admires her sexy, muscular legs as they him with an across-the-throat neck scissors!
Then it’s on to what she calls ‘slave-69’ and her feared and most lethal scissors of all…her lights-out reverse head scissors of which she applies several times in this video!
At one point Janira is concerned that she may have actually terminated the poor slave saying…”God, please don’t yet!”, then covers his mouth to muffle his screams!
This video is nothing short of VICIOUS as time and time again, her time-wasting slave is subjected to a near-termination experience between Janira’s SEXY but LETHAL LEGS!
To end his suffering, Janira uses her gymnastics skills by planting a full reverse split on his neck which she eventually transitions into one more revere head scissor warning him!…”Oh, you’re going to get knocked out!”.
After doing just that, while her slave lays and on the floor, she looks at the camera with a simple message for the rest of the time-wasting wannabe slaves…”By loser!”.
So check out GORGEOUS Janira Wolfe doing what she does best…teaching men that very few are good enough to survive her thighs and be her slave in ‘So You Wanna Be My Slave!?’. 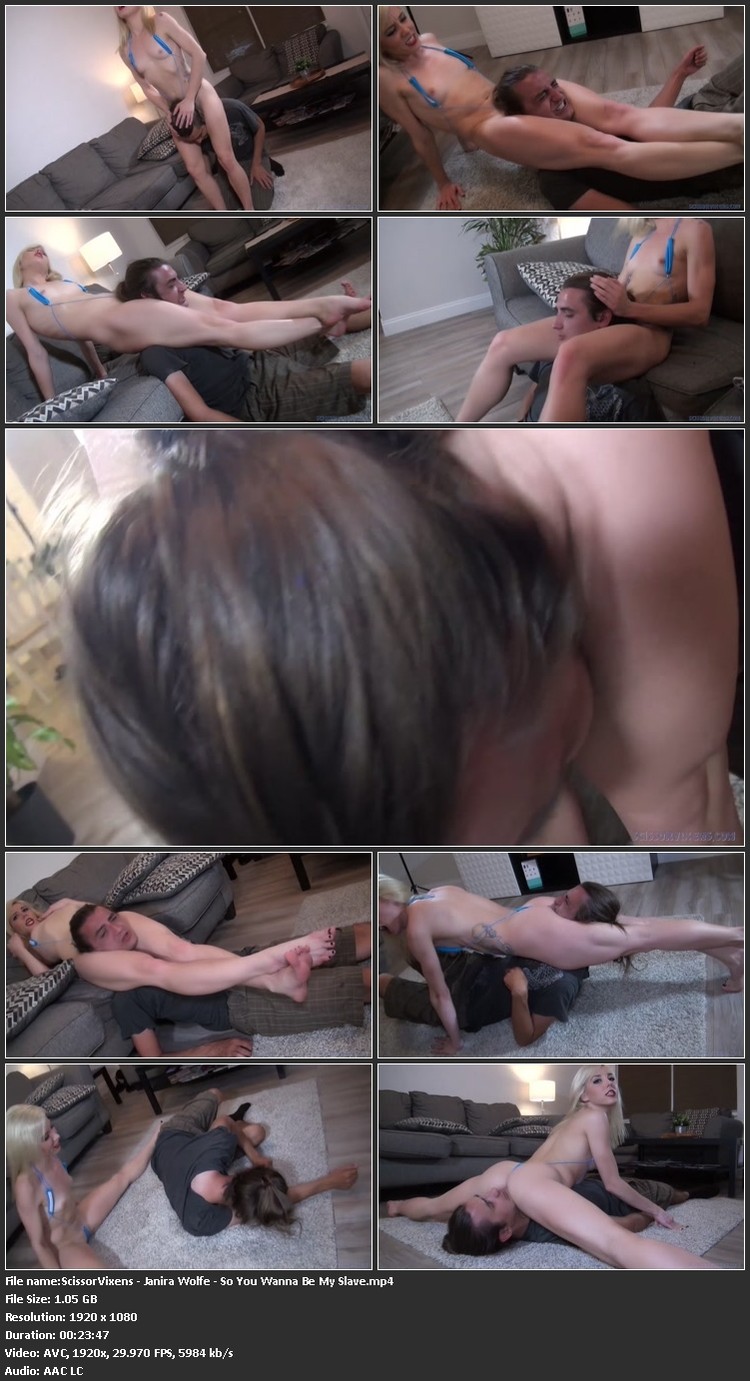 Bella Trix has been waiting hours for her car to be fixed at a local mechanic. When he finally returns to the waiting room to inform her what is going on with her car, he is extremely condescending and rude to her. Turns out Bella knows more about cars then he assumed and she calls him out on his bullshit diagnosis with a devastating knee to the groin that sends him to the ground! While on his knees dealing with the pain, she informs him that he has screwed over a few of her friends and that this was punishment for that as well. The misogynist mechanic tries to make every excuse in the book but each one is met with a lightning fast kick or knee from Bella’s strong legs. With his testicles wrecked the mechanic finally gives in to her like the loser he is, agreeing to fix her car for free! 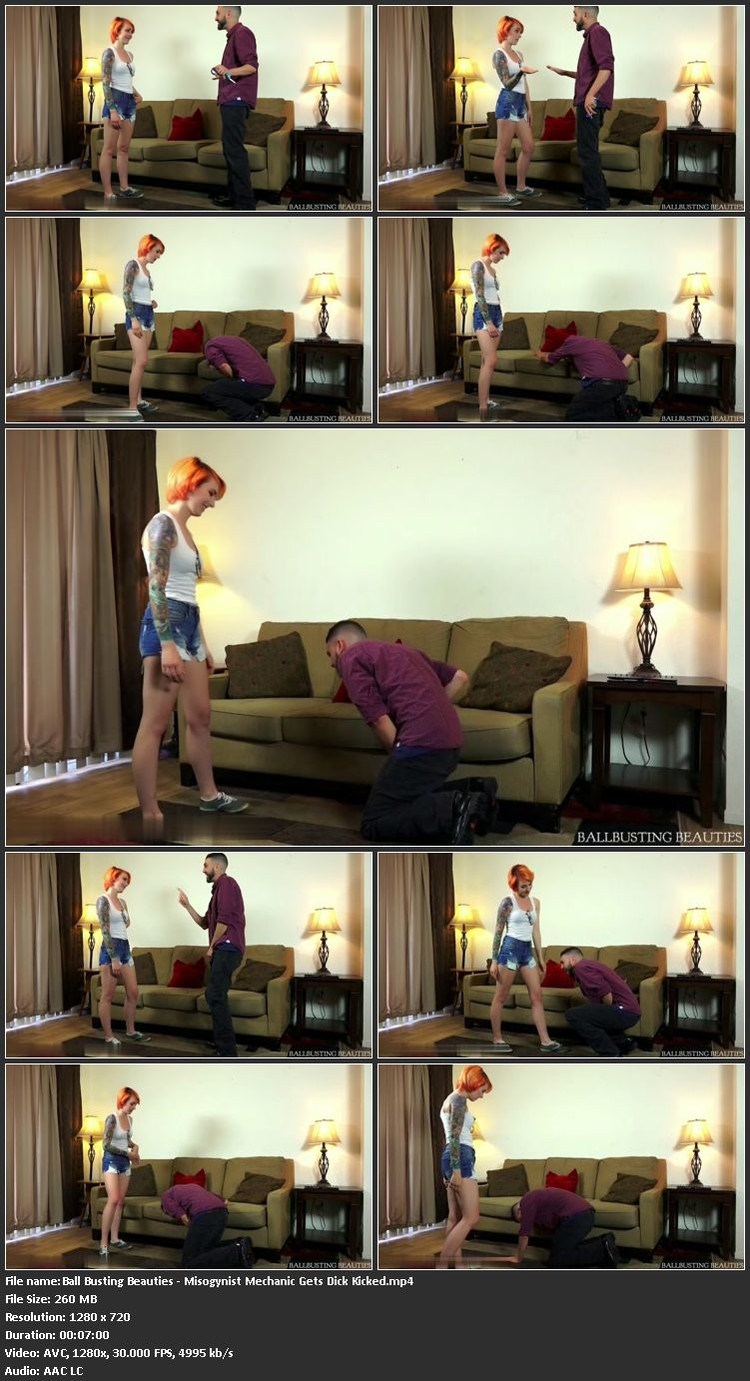