Faces are revealed in the purchased clip! Only obscured for the public previews.
Venus and Lilith are the cutest best friends you’ll ever see. They are actually real life besties, which makes this clip an instant classic. Lilith was invited over for her first ever foot worship, and she asked Venus to join her so it’d be more fun! The two haven’t showered in days, and start the clip saying just how stinky they. Both are wearing cute boots that hide dirty stinky socks underneath. Ozzy takes off Lilith’s boots and asks to sniff her socks. He presses his nose to inhale the stinky scent of them. Lilith and Venus can’t help but giggle over and over, as their foot boy serves their perfect feet. The clip continues with Ozzy taking Lilith’s socks off, and licking them clean. Every inch of her sweet, salty, stinky feet are licked thoroughly. The two cuties sit there talking to each other while Ozzy’s tongue gets to work, often times going on about their conversation as if he weren’t there at all. Lilith and Venus give off a spoiled/bratty vibe, and have a lot of fun teasing their foot boy. Venus scoots closer to Lilith on the massage table they happen to be sitting on, leaving it covered with booty sweat. “Lick it!” Lilith says, making their foot boy tongue up the ass sweat left behind by Venus’ perfect little butt.
Eventually Lilith’s feet are fully cleaned, and it’s time for Venus to have theirs attended to as well. Ozzy pulls off their boots to reveal that Venus’ sexy blue and white striped knee socks are greyed from dirt and sweat on the bottom. (These are well worn REAL stinky socks, everyone!) “Those are really smelly” Ozzy says after sticking his nose up to the base of the toes to take a big whiff, causing the two best friends to erupt in giggles, and Venus to say “Hell yeah they are!” Lilith is curious how stinky they are, and even asks to sniff they herself. Venus complies, and even sniffs their own feet a little to see just how bad they really are.
When those dirty socks come off, you see a great closeup shot of the dirt, toejam, and little specks on Venus stinky feet that haven’t been washed in days, so Ozzy gets to work on them as well. Before he’s finished, they’ll be fully cleaned, every inch of salty sweat residue, or speck of dirt will be licked by his tongue and swallowed. Though that is just the minimum responsibility of a good foot cleaner. The worship continues with lots of great shots and conversation between Lilith and Venus, and and eventually towards the end, the two BFFs reward footboy Ozzy’s hard work with a barrage of kicks to the face. They get really into after he tells them they can kick harder. They don’t hold back, working up even more sweat pummeling his face. He sticks his tongue out so the two can kick and footslap it as well. Working up a sweat with these kicks, Lilith mentioned her armpits getting sweaty. Ozzy asks if she’d like him to lick them, and she says yes. The clip finishes up with some sweaty pit licking, after which Ozzy asks Lilith “Now are you ready to sit on this face with your stinky, rank ass?” and the answer is… “YES!” Lilith says! So if you think these two cuties are as incredible as we do, be sure to pick up the next clip, featuring the two doing a STINKY tag team facesitting session!

As usual, everything that happens in this clip is 100% real and not exaggerated. Venus and Lilith were actually stinky and their feet tasted sooooo good! Ozzy has a fetish for stinky cuties like this, so we don’t waste our time pretending the stink is somehow a punishment like some other studios tend to do. If that’s not your vibe, then don’t get this one. We’re proud to highlight the love and enjoyment of stinky dirty socks and feet! Venus manages to let loose some epic belches in this one as well, so if you like non binary cuties burping, you’ll enjoy this one even more! There’s so much packed into this 37 minute clip, a short description can’t fit nearly enough, and with enhanced vibes from background music by The Weird Sisters Band, this is a legendary foot fetish clip, so don’t delay, collect this one today!! 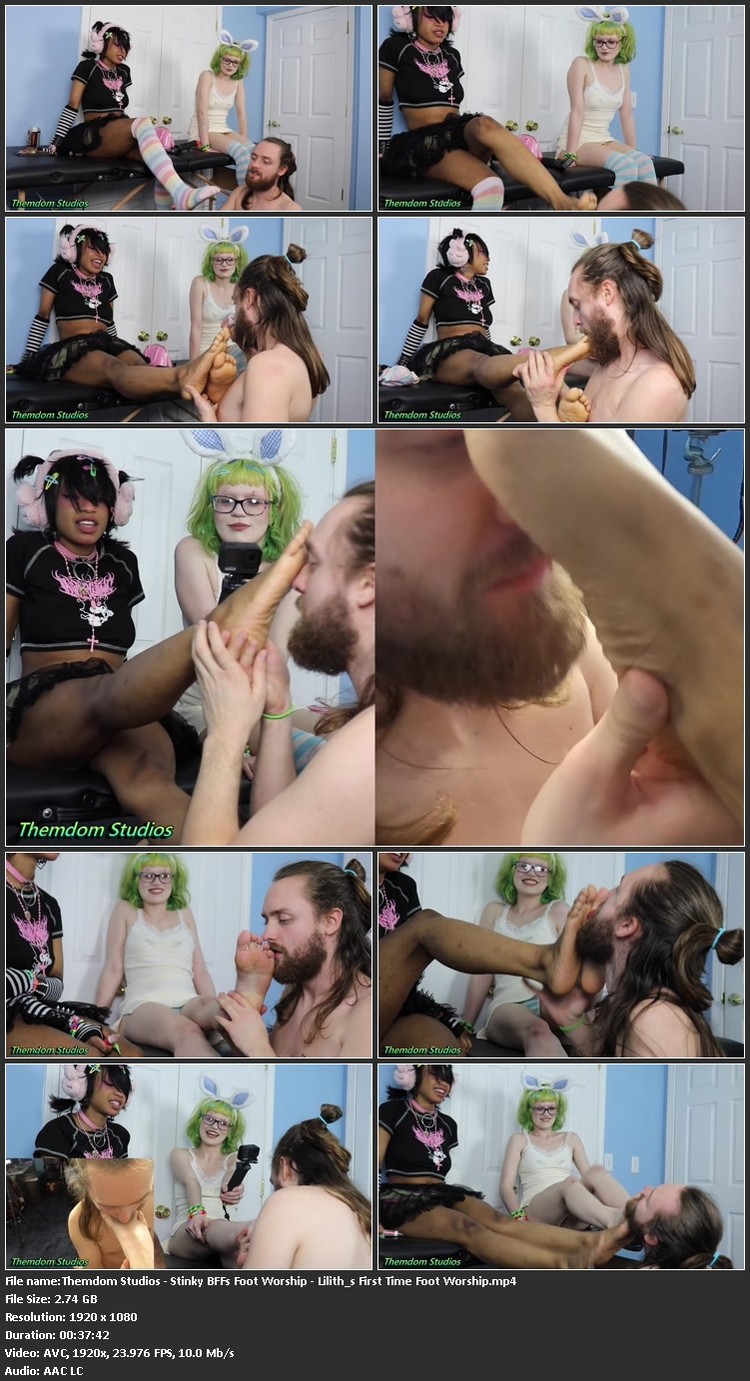